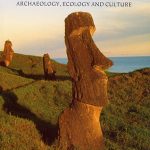 Since Easter Island (Rapa Nui) was first contacted by the Dutchman Jacob Roggeveen nearly three centuries ago, the people, culture and, most of all, the monolithic statues of this remarkable island have been seen by Westerners as an incredible puzzle, a riddle with no solution.

At the heart of the so-called mystery of Easter Island stand the gigantic moai, the supreme sculptural achievement of the Rapa Nui people and, indeed, of all Polynesia. Re-erected upon their rectangular stone platforms, lying along ancient transport roads, hidden deep in seaside caves, or standing upon the slopes of Rano Raraku, where they were hewn from the living rock, the statues are palpable evidence of the genius and obsession of a people. How were they moved? What do they mean? Nearly 1,000 statues have been meticulously measured, drawn, mapped, and photographed by archaeologist Jo Anne Van Tilburg and her Chilean and Rapa Nui colleagues over more than twelve years of dedicated research. Drawing on the insights that have been gained into sculptural techniques, design attributes, and formal variation, the author examines Rapa Nui prehistory in the context of new understandings of ecology and culture. Detailed drawings of statues by one of Rapa Nui’s most talented artists, many published for the first time, reveal the fluidity of line and complexity of meaning encoded within these stone figures. Historical photographs from museum collections illustrate the vital role played by many Rapa Nui people in the documentation and preservation of their own culture. The latest methods of statistical analysis, computer imaging, and robotics programs are brought to bear upon the perplexing question of statue transport, and the author offers an exciting yet compellingly logical model of how a near-fourteen-ton statue could have been moved almost the entire length of the island. Written by the foremost authority on the subject, this fascinating book is another important step toward unravelling “the mystery of Easter Island.”